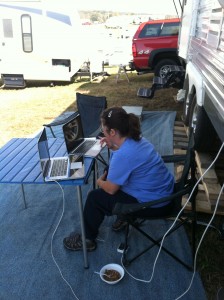 While at Martinsville, there was also work that had to be done.  I had to log in for work, and Cindy (my wife) had some VA work to do.  In this picture, she is using one computer to look at pictures that she has to write about on the other computer.  For our work on the road this Autumn, we were using a Verizon Mifi, which is either a blessing or a curse, because it allows you to stay in touch while away.  For us, it is a blessing, because even though we still have to do some work, it allows us to be out more.

Since our trip in October, I have upgraded to a tablet that also serves as a wireless hotspot.  It is a 4g device, whereas the Mifi was a 3g device.  Next year we will see how it works, but I wanted to have a device that could serve two functions.  Since we are on Verizon’s network, we can’t use the phone as our hotspot because then every time I would get a phone call, the network would go down.

« Camping on the hillside at Martinsville
Jack »