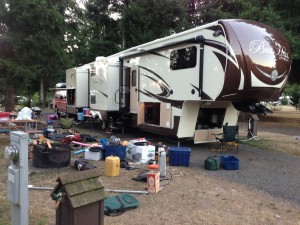 We have been traveling for three months now, and are currently living in Castle Rock Washington while I work as a therapist out of Longview.   We started this adventure in the camper you have seen in earlier posts, a 2012 Jayco 32BHDS, a 35 foot travel trailer with two slides and bunks in the back.  It is a great trailer and has served us well, but is not up to being a full timing unit, and we have been noticing that the lack of room with six people is going to make the rainy season and home schooling difficult.

For about a month now, I have been researching different makes and trailers, including fifth wheels.  These units seem to give the most “bang for the buck” for us, and have many floor plans.  I had not looked at Evergreen until someone else brought a travel trailer in made by them, but when I researched the floor plans, one in particular jumped out. It’s primary difference (floor plan wise) was that in addition to the standard dinette, it had a separate table and chairs.  Hmmmmm, this one had possibilities.  Coincidentally, there was one located about seventy miles from us, so we drove up, looked at it, and over the course of a week, decided to buy it.

The picture that you see here shows the coach after it has come to the campsite and in the middle of figuring out where things are going to go.  What a mess. We are slowly figuring it out.  We knew when we picked it up that it was going to have to go back for a couple of things that were wrong from manufacture, per the service gentleman.  We expected that, as all new ones have teething problems, and appreciate his honesty in telling us everything that is up with it and how they plan on fixing it.  Basically, they are ordering new for anything that is wrong and simply replacing rather than fixing.

The other question we faced was what to pull the camper with?  We typically pull with a van, so towing a fifth wheel with that would be problematic.  I will explain that in the next post.  For now, I have to go organize.  More details to come as I find out more about this camper!

« Camping Away From “Home”
The Truck »