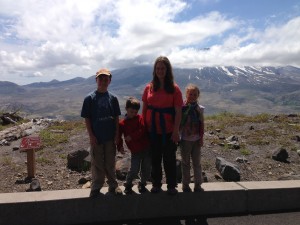 It has been a couple of weeks since I have posted.  In that time, we have driven through some beautiful country from the Black Hills of South Dakota to Longview, Washington, where we now reside in a campground.  The drive was uneventful, with only a few climbs that were very long.  The van handled the camper as well as it could be expected to, but it is admittedly not the most stable combination.

Now that we are here, I have started my traveling job, and am working as a physical therapist for a local home health company.  So far, I would say it goes well.  The people are nice and easy to work with.

That brings us to our weekend activities.  We are going to different areas to see different types of things so far.  We have been into Oregon and over to Astoria at the mouth of the Columbia River and stopped at a local beach on the way back.  We were able to drive on the beach, and the kids went into the river (it was COLD.  The river is still handling snow melt at this time of year).

This picture was taken at the Mt St Helens Johnston Science center, named after the first scientist to see the eruption in 1980 (unfortunately, he did not survive).  Seeing the mountain, and the devastation that remains even after 30 years, is fascinating and not a little daunting.  Hard to comprehend that much energy being released in such a short time.  The kids continue to enjoy seeing new sights, and are fascinated at all that they have seen so far.

Next weekend, who knows where we will end up?  Maybe we will take a steam train ride that is close by.  Maybe we will head south and hike to a cave that is formed from a lava tube.  Either way, the adventure continues.

« The Black Hills, South Dakota
Camping Away From “Home” »