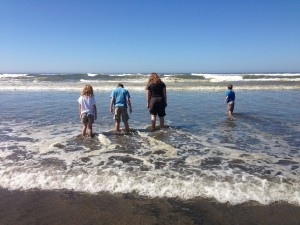 The other day in our campground, I ran into another father and a friend who both said that they would like to full time, but just don’t see how they could “right now”. “It will be easier once the kids are gone, and we will try it then”.  “The timing will be better then”.  I heard all those lines.  They think it is great that we are doing it, but see it as some sort of aberration because they cannot see themselves making that jump for whatever reason.

My answer to them, and to others that say the same, is that part of the reason we are doing this is BECAUSE of the kids.  To get them out of the rut of being in the same place all the time.  To make new friends.  To see more of this great country of ours.

We have been on the road for five months (I know, not long by most standards).  In that time, the kids have seen a lot of countryside as we have come across from Ohio to Washington.  We visited the Badlands, Wall Drug, Mount Rushmore, Crazy Horse, to name some on the way across.  The nature of my job is that we stay in one place for three months, which has given us time here in Washington to see Mount St Helens on all sides, to tent camp both there and over on the Pacific Coast, and to see most of the area around us.  If we still had a house and the accompanying maintenance and grass cutting, we would not have been able to do this no matter where that house was located.

Also during these five months Cindy has been expanding her online VA business, we have moved from a travel trailer to a fifth wheel, and purchased a truck to tow it.  Before we left, we sold most of our possessions, and put the house on the market (it has sold and we are waiting to close).

It has been a busy year for us, but fun.  To the people who have been saying to us that they “can’t do that right now” or “I wish we could, but can’t” even my kids have been telling them that they could, and that they are having a lot of fun with it.  We are headed out this weekend for another trip as the fifth wheel gets some “new trailer” repairs and tweaks, so we will have to see what else is out there.

« Another Weekend Getaway for Us
With the House in for Repairs »