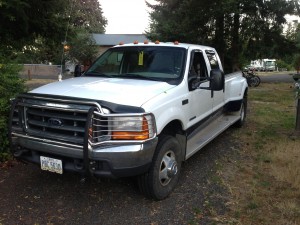 With the new “house” came another requirement.  Since we tow with a van, we have been unable to tow a fifth wheel camper.  During the time that we have been looking to get a new camper, my father bought a motorhome, which left him with a truck that he would not be needing.  Hmmmmmm.  I don’t necessarily need all the new doo dads of a new truck, and I know the history of this one, and I bet he would sell to me.  It is a bit older (2000), but has the 7.3 Powerstroke and only 100,000 miles on it.  As we started looking more seriously, we started seriously contemplating using this as the vehicle to pull the fifth wheel.  In the end, we did buy it, and will use it for the forseeable future to pull it.

The other part of this story is how we got the truck.  Not only did we buy the truck from my dad, he and mom delivered it from Ohio.  He also had a pick up camper he would not be needing, and we figured we could sell it out here easier than in Ohio.  They drove out over several days, spent a week with us so we could show them some sights, and helped us move our stuff out of one camper and into another.  It was a great week, and a good excuse for them to come see the grandkids 🙂

« New Home for the Thomas Family
Another Weekend Getaway for Us »