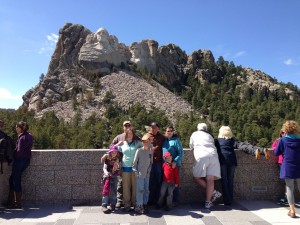 Over the weekend, we went to the Black Hills in South Dakota.  We moved over to a KOA from Wall, SD on Friday, which was miserable, as it was extremely windy and not easy to drive in.  The KOA we stayed in was a great campground, with friendly staff and very busy personnel working on improvements the whole weekend that we stayed.  It’s only issue was a lack of speed in its internet.  If you are in the area, I highly recommend this KOA.

While in the area, we saw Mt Rushmore of course, but also drove down and looked at the Crazy Horse sculpture, which is slowly being completed south of Mt Rushmore.  The face is completed, and a lot of the mountain has been removed, but much work remains.  The sculptor and his family have turned the area into an overall Indian history museum and educational center, with room for native artists to showcase and sell their work as well.  We found the area to be very educational, and the kids enjoyed the whole experience immensely. 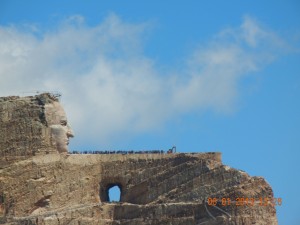 We also spent some time driving on some of the scenic highways in the Black Hills region.  The road we picked was slow, steep, and very curvy, with several narrow tunnels and some interesting road work to lose elevation and still maintain be drivable.  It caused the road to cross over itself multiple times as it descended into the valley.  The highlight of that trip was the herd of buffalo that decided to hang out near and on the road, causing probably the only traffic jam in the Black Hills.

Overall, we had a great time in the Black Hills region, and have now moved on to Montana, where we are now staying.  Tomorrow, we continue our trek to Washington, and will hopefully be stopping in Missoula for the night.