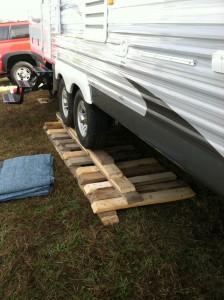 This picture shows what we do to camp where we want to, whether it is level or not.  A few posts ago, I showed a picture of the front pocket of the camper which was filled with boards.  Looking at this, now you know why we carry so many.

In this picture, the wheels are sitting about 5-6 boards high.  After this picture was taken, I had to add concrete blocks to under the steps to allow for reasonable entry/exit of the camper.  The construction of this stack is more elaborate than most of our blocking because of the slope we are on, and because the ground is a little soft, so I wanted to spread the load out some.

The reason the base of the stack is built the way that it is is so that the boards the camper sits on will be level, so it can’t fall off when the bottom edge of the board sinks in and rolls.  Under the boards that are perpendicular to the camper are other boards which lie parallel to the camper.  This serves to make the perpendicular boards level, so that the other boards which the wheels sit on are now level and stable, as mentioned above.

The reasons to go to this length are several, in that we were going to be there for a week, we have four kids that are going to run in and out, and I don’t like to stack 6 boards on top of one another without a solid base.

All of these boards are 2×6, which I cut to length and put a 45 degree angle on each end, to lessen the chance that a board will kick up while the camper wheel rolls up onto it.