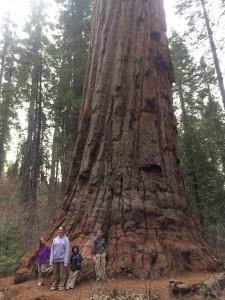 Since we got to California we have been hearing about places to go and things to see.  Obviously Yosemite tops that list, but many other things have been mentioned.  One thing that was not mentioned was Calaveras county Big Trees State Park.

We have discovered that many national parks have smaller parks with great scenery around them.  The benefit is smaller crowds to fight.

In looking at a map of the area after a cave visit in Murphys CA, I saw a small state park located up Route 4 near the town of Arnold, CA.  Not knowing anything about it, we decided to take a look, and are very glad we did.

This grove of trees was discovered originally in 1852 by Augustus T Dowd. Through the next several years, the largest tree was cut down and another had its bark removed to take east for a display.  In 1931, Big Trees State Park was created to preserve the North Grove of giant sequoias, with the South Grove being added later.  The entire park is only approximately 10 square miles in size, and has two campgrounds within its boundaries, one of which is open all year and one which is open late spring and summer.

At the North Grove there is a very nice trail that is easy to walk and offers awesome views of several giant sequoias. We took our children also, and they had a blast over the 1 mile or so walk, climbing on and in several of the downed trees. One tree was cut many years ago so that people could drive their cars through it, and one of the trees has a picture where an entire marching band was playing on top of it.  Several of the fallen trees are also big enough for people (at least kid sized people) to stand up in, as they are usually rotting from the inside out.  The root systems are also  quite large, and easy for people to climb on like a jungle gym.

Overall, we found this to be a great walk for the kids and us, as well as very educational for everyone, us parents included.  We greatly enjoyed our visit here, and are contemplating a return visit to camp in one of the campgrounds.

« Our Campsite in Pine Grove, CA
A New Camper for Us »